It's payback time for all those poor asteroids who have been victimized by those naughty, naughty projectile-firing triangular spacecrafts since the 1970's.

This time it's personal.

via DaringFireball
Posted by Hans Christian Schmid at 7:30 AM 1 comment: 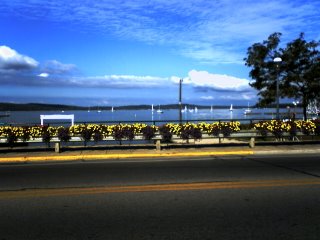 I snapped a few shots with my camera phone on the Four-Day West Route DALMAC 2006. See them here.
Posted by Hans Christian Schmid at 8:05 PM 1 comment:

OK, OK, it was a lot more fun than that description. In fact I've been a little bummed out ever since it ended.

The weather was great. Maybe a tad cool as I had my leg warmers on most of the ride every day, but nothing to complain about. Heck, we were outside and not getting rained on, frozen, or cooked. Can't ask foir much better. Day 1 we had a strong NorthEasterly wind. That was less fun than days 2 through four where winds were neglible upon us and mostly shielded by trees.

"The Wall" was all we seemed to talk or worry about for the first 3 days and a couple hours of day 4. We tried to conserve energy on day's 2 and 3 to make sure we had legs left for "the Wall".

When we turned the corner just out of East Jordan and "The Wall" came into sight, It seemed incredibly small to me, compared to it's legend. I asked some riders passing us as we approached it if this was "The Wall", and one replied "No, it's after this one", he then turned to his buddy and said. "Im messing with thier heads" (Max was right beside me). It just seemed the lead up from East Jordan was far less steep than we were led to believe sO I had to question whether this was it. "The Wall" itself was much less awe inspiring, but with the turns following what I had memrized on the map and the STEEP HILL sign, this was it.

Now don't get me wrong, what it lacks in size it makes up for in steepness. My cyclecomputer registered grades of 19% at the top. It basically gradually increases in grade as it rises, maxing out just before the top. Speaking of maxing out, my heart rate, hit the 170's at the top. I had to stand up on the pedals to keep the weight from shifting off of my front wheel half to two-thirds of the way up. As I came to the gets your atention part of the hill, one rider zoomed past while another pulled even with me on my left and held there for a while. Referring to his faster buddy, I asked him, "Is it easier to ride it fast?", he replied "For him it is." I ask, "Why's that?". With a laugh in his voice, he says "Because he's insane". I ended up surging at the top to pass this young whipper-snapper. These are my memories of "The Wall".

Much to my surprise. I didn't pass out from exhaustion on the bus ride home that night, although I did nap briefly, probably for less than an hour. I'd heard that everyone sleep on the bus home, but I'm guessing only half the passengers did.

Max is already asking about next year. Will it be DALMAC or Ride the Rockies.
Posted by Hans Christian Schmid at 8:03 PM 3 comments:

Andrew finished the Detroit Free Press Marathon in 3:09:36 a couple weekends ago. Impressive. A personal best for him, and only the 144th runner to finish. He was 14th out of 447 in his age class.

For comparison, he only gave 10 minutes to Lance Armstrong (2:59:36) who ran the New York City Marathon last weekend. From how Andrew described the marathon, it's sure a lot more fun to ride a bike 100 miles or maybe even 200.

You can see all of the results here.
Posted by Hans Christian Schmid at 7:44 PM 1 comment:

Looks like another Tour win for an American team, at least.
Posted by Hans Christian Schmid at 7:40 PM No comments: